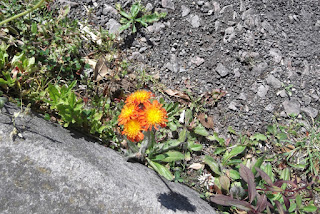 Cara shifted position, easing out her back, a little envious of Snaps who dozed happily in the shade of an overgrown pergola. Her spine spoke in sharp cracks, but she had promised herself she would finish cutting back the bramble patch before sunset. A glance at the sky revealed a rapidly sinking sun and the first blush of violet. Cara set to with a will.

Five minutes, a pile of tangled, thorny debris and several new battle scars later, she sat back on her heels and stared at the odd little tableau her efforts had revealed. At the centre of the patch a smooth triangle of stone had been set up. Next to it, a toy-sized pickaxe sat buried in the earth. To Cara it looked uncomfortably like a memorial. Scratched into the stone were the words ‘Olla’s Gold’. The entire area was surrounded by orange flowers with vivid yellow centres.
“What is this, Grace?”

She’d got into the habit of chatting to her late aunt, surprised by how often an answer to her question slipped across the surface of her mind from nowhere. But it wasn’t Grace who spoke now. Snaps shot up and pounded across the pocket handkerchief lawn, strewn with pink-tinged daisies, barking excitedly. This was followed by the gate clacking hard against its post and a barrage of gruff complaint.
“Get off me, ya moon-touched beast! If you want an answer, lass, call off your hound before I drown!”

Treebo batted ineffectually at Snaps, who was doing his level best to bathe every part of the little man, and Cara stifled a grin, using a dog bone treat as a distraction, hurling it into the herb wilderness. Snaps shot off, and Treebo smoothed himself into some semblance of dignity before sauntering over to the bramble patch. He’d developed a habit of visiting Cara most days, usually around tea time, Cara had noted, and today was no different.

“Can’t tell tales on a dry throat.” He stated with a pointed look at the empty mug beside Cara. She smiled, got up, eased out her knees, and headed into the kitchen. Treebo followed behind, occasionally shaking his head at her amateur gardening efforts, but he was soon ensconced on the cushion Cara had discreetly set up on a kitchen stool, which allowed him to watch her prepare tea. This usually included the dispensing of wisdom about how she was doing it wrong, but Cara jumped in before he could start up.
“So who was Olla and why is she buried in my brambles?”
“Buried? Ah, that’s no burial. Tis a marker.”

Relieved there was no small pixie coffin in the garden, Cara set the teapot on the table, followed by sandwiches and a seed cake she’d made out of Grace’s personal journal. She sipped quietly at her tea, aware she would get no more until Treebo had passed judgement on the delicacy of the sandwich presentation and told her her cake was ‘… no as good as Grace’s, but no bad, no bad.’ The rituals over, Treebo dropped off the stool and took up his new favourite spot in Grace’s rocker by the hearth.

“Olla was a bundle of energy growing up. Drove her mother, Lenia, wild. Aye, she was ever into things she had no business interfering with, and ears! Ears so sharp she’d hear a mouse whisper in the middle of a thunderclap. Them ears got her into a spot of bother more than once, but Olla’s gold was probably the sweetest. See, old queen Lucani hadn’t long been set up and she was trying to make her mark on the palace under Dimwood Hill. She wasn’t a one for show generally, but she did have a little weakness. She was awful fond of gold. She had a personal team of brownies whose only purpose was to wander human habitats, looking for gold left unattended.

Lenia worked in the sewing room at the palace. Some days she’d have to take my niece, if lessons were out or there was no-one to watch her. On this occasion, Olla somehow got within hearing distance of the queen. Story goes, Lucani was complaining that there wasn’t going to be enough gold for the statue she wanted to erect in the throne room. She had this idea that sticking a golden image of Jejune would …”

Cara held up a hand; loathe to halt the flow but needing to understand.
“Who is Jejune?”
“Girl, you need to read your aunt’s journals and get to learning. Jejune is the Spring goddess of youth and vitality.”
A little abashed – Treebo was right, she hadn’t yet spent enough time on her education – Cara smiled, proffered more cake, and settled into the required respectful silence.

“Where was I? Ah yes, Lucani thought a gold statue of Jejune would help put across the idea of a new, young queen, a fresh start. Anyhoo, Olla overheard this conversation and an idea got lodged in that mercurial brain of hers. She decided, on the spot, that she would find enough gold for Lucani’s statue.

Over the next week, Lenia being deeply involved in the creation of Lucani’s coronation outfit, Olla managed to slip away a lot, unmissed, and she spent her time searching for gold. Ya have to remember, she was only fifty-five, barely out of the cradle, and when she spotted them flowers she was convinced they were the perfect thing.”

“What flowers?”
“The ones round the marker, of course. Did ya think we just marked random weeds for no reason but fun?”
Cara shut her mouth and determined to remain silent. Treebo shook his head in mock despair and carried on.

“Olla borrowed a pickaxe from one of the brownie gold miners – I suspect he wasn’t aware of this ‘loan’ – and set off to mine gold from the centre of these flowers. She worked for three hours, hacking away at the blooms, waiting for the gold to drop. Frustrated, convinced she was doing something wrong, she decided to head to the palace and ask a brownie miner for advice.

To this day I don’t know how she knew where to go, but she bee-lined straight for the royal vaults. Stomping through the doors - open as there was a visitor to the vaults -  she stood four-square, hands on hips, waving one of her gold flowers and demanded;
“Why doesn’t the gold drop!”

The collection of brownies gathered in a circle in the centre of the rom, turned, aghast, and then parted sharply to reveal Lucani. She’d dropped in to see what progress had been made on the statue; the answer being not a lot. She stared at the small pixie girl, her feet brown with earth, but the rest of her…
“Little one, it seems the gold does indeed drop.”
Lucani directed a brownie to bring over a silver shield which was hanging on the vault wall. She knelt, held it in front of Olla and said,
“Look.”

The reflection revealed a tiny pixie girl covered head to ankles in a thick layer of golden pollen. Lucani smiled and looked thoughtful. She rose, took Olla’s hand, and started through the palace, heading for the sewing room. When they arrived she smiled at the terrified Lenia, whose eyes darted from her wayward daughter to the new queen, as yet an unknown quantity.
“Lenia, yes? Your daughter is very clever it seems. I wish to borrow her for the coronation, with your permission.”
A very confused Lenia nodded vacantly, and stared at her golden child in bewilderment. Lucani vanished back to her business and Olla was left to try and explain what had happened, Lenia undecided if she should be angry or grateful.

A month later, when Lucani’s coronation procession wended its way through the Fairy Wood, at its head, riding the queen’s very own pet fox, sat Olla, resplendent as Jejune in her paint of Olla’s gold.”
Cara smiled, loving the little insights into Treebo’s family and the history of the fae folk. She still had one question.

“Why is that little marker in my garden?”
“When you get to being wise, you’ll know we mark all important events with stones. Olla found her gold in Grace’s garden, so we marked it there with the stone.”
“The pickaxe?”
“That was Lenia’s doing. Olla, in her pride and excitement, took to carrying that axe around with her everywhere. Afeared for her home and the safety of the local children, Lenia made up a tale that the axe had been designated a sacred implement and had to be set up beside the marker stone for the sake of history. Olla wasn’t happy about it, but she couldn’t argue with tradition, so she thought, and the axe was left with the stone. Even had a little ceremony and all.”

Cara walked with him as Treebo headed out. He paused at the gate before passing through, nodded toward the patch of Olla’s gold and delivered a parting thought.
“Read the journals, lass. You are the keeper of Olla’s gold now.”
He headed into the night and Cara went inside, straight to the bookshelf.

Popular posts from this blog

Mojo Writin
Lydney, Gloucestershire, United Kingdom
Just a little corner where I can share thoughts on life, the universe and everything. With my interests ranging from being pagan to wrestling and visiting multiple points between, who knows what I might be talking about on any given day :)